Silver vs Bronze: Who takes the medal? 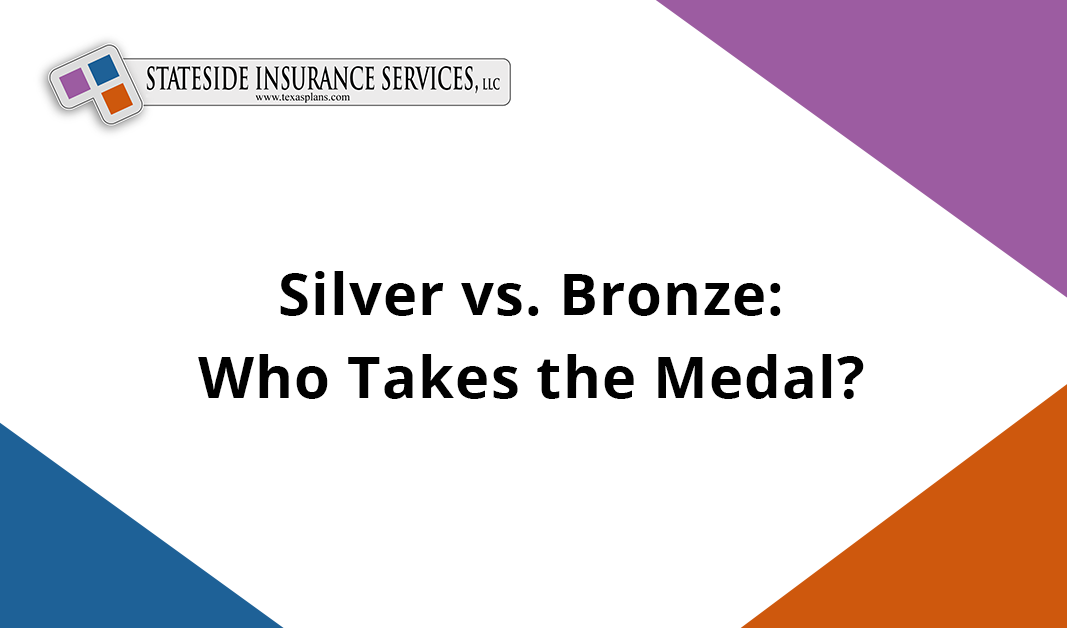 When the Affordable Care Act (ACA) was signed into law on March 23, 2010 the health insurance industry changed overnight.  The consumer was suddenly faced with a completely different landscape, with a host of new terms such as essential health benefits, medical loss ratios, guaranteed issue, community rating, subsidies, cost-sharing, all within the newly created health insurance marketplace.

One of the most significant changes involved benefit and coverage design, with plans divided into categories.  Health insurance plans were assigned categories in order to allow the consumer more ease when comparing different plans and to understand the level of coverage for each of the categories.  These categories were defined as metallic tiers, , Gold, Silver and Bronze.

Each metallic tier has a different actuarial value, which is the percentage of costs each plan will cover.  For example, Gold plans have an actuarial value of 80%, which means the plan will cover 80% of healthcare costs, and the remaining 20% will be the responsibility of the insured.  Silver plans 70% and Bronze plans 60%.  Obviously as the actuarial value increases so do the premiums.

During the first two (2) open enrollment periods consumers had the full complement of plans from which to select.  Beginning in the 2016 Open Enrollment period, carriers began reducing the number of metallic options.  Platinum plans were eliminated because the premium cost resulted in minimal sales activity.  Also, the elimination of the Platinum plans was in response to the insurance carrier exposure, especially with individuals with subsidies who had known medical conditions who would fully utilize the Platinum benefits of low deductibles and high coinsurance participation by the carrier.

By the time the 2017 Open Enrollment period was launched Texas consumers were given multiple options within the Bronze and Silver metallic tiers and limited options within the Gold tier.  The change in product mix shifted the interest in Silver plans and decreased activity in Bronze plans.  At the end of 2016 Open Enrollment 26% of enrollees were covered by a Bronze plan and 68% were covered by a Silver plan.  By the end of the 2017 Open Enrollment Bronze enrollment had decreased to from 26% to 23% and Silver enrollment had increased from 68% to 73%.

The change in product mix was reversed with 2019 Open Enrollment.  Bronze plan enrollment increased to 31% of all ACA insured members and Silver plans decreased to 62%.

The principal reason Silver enrollment decreased was due to cost-sharing and how carriers set premiums for those plans.  Cost-sharing was available to consumers who make less than 250% of the federal poverty level (FPL).  These individuals not only are eligible for subsidies that reduce the monthly premium cost but also financial assistance from the federal government to decrease their out-of-pocket expenses.  Cost-sharing results in reductions in an individual’s deductible or their maximum out-of-pocket.  However, to take advantage of cost-sharing benefits you must select a Silver plan.  Cost-sharing is not available for individuals enrolling in Bronze plans or Gold plans.

Politics played a major role in the enrollment decline of Silver plans.  The Trump administration made the decision to no longer fund cost-sharing; however, it was incorrectly reported in the media as ending the subsidies which lower premiums.  The carriers expected cost-sharing to end and did not want to set premiums based on government funding that may not occur.  Carriers responded with the practice of “Silver Loading”, which refers to the practice of insurers applying the full premium increase attributable to the loss of cost-sharing payments to Silver marketplace plans, rather than raising the premiums for all metal plans by a smaller amount.  The result of higher Silver plan premiums meant that insurers received higher premium tax credits from the government.  Since a consumer can use their tax credit to purchase any metal tier (except a catastrophic plan), many consumers were able to enroll in Bronze or Gold plans at a much lower premium relative to to prior years.  Overnight suddenly Bronze plans were significantly cheaper than Silver plans and Gold plans were a value with richer benefits as compared to Silver plans.

Silver Loading can best be documented by comparing premium increases from 2107 to 2020 plan years by each metallic tier; Bronze, Silver and Gold.  Bronze plans increased 19% and Gold plans increased 28% during the three-year period.  These increases compared to a 39% increase for Silver plans.

Consumers who did not qualify for cost-sharing were faced with how to evaluate the differences and advantages between Silver plans and Bronze plans.  Through counseling clients and discussing the plans and their benefits, Stateside was able to breakdown the major plan differences into four areas: (1) deductible, (2) maximum out-of-pocket, (3) office visit copay and (4) prescription benefits.  By focusing on these four areas it became easier to assign a value to the benefit and determine if the plans overall value justified the premium.

Texas consumers would project what their initial medical cost would be for the policy year to determine if the additional premium for the lower deductible Silver plan could be justified.  Assuming a family of four would pay $600 more in monthly premium to move from a Bronze plan to a Silver plan and reduce their deductible from $6,000 to $1,900, the additional $7,200 in annual premium expense is difficult to justify with a $4,100 reduction in deductible.  Since the deductible is only one contributor to the overall cost, the justification for the higher premium does not need to be supported only by the reduction of deductible, but it would need to make a substantial contribution.

In order to justify the $4,800 to $7,200 in additional premium from a Bronze plan to a Silver plan, the family of four would need to visit physicians between 48 and 72 times to realize savings in office visits to pay the full amount of the additional premium.

As with lower deductibles and lower maximum out-of-pocket expenses, the office visit copay benefit cannot fully justify the higher premium but can be used in conjunction with the other plan benefits to make the decision to enroll in a Silver plan the smart economic decision.

Since prescriptions have become so expensive, anyone taking a maintenance drug can typically justify the Silver plan strictly on the copay benefit as compared to the retail price.  An ongoing maintenance drug such as Crestor, with a retail price of approximately $170, will cover a large portion of the premium difference between a Silver and Bronze option.  The justification becomes even easier when you combine the prescription benefit with either a lower deductible or lower out-of-pocket maximum offered by Silver plans.

Stateside Insurance Services, since 2003, has focused on providing comprehensive health insurance information, responsive customer service and expert industry knowledge for Texas consumers.  Stateside has annually been recognized by health insurance carriers and the Health Insurance Marketplace as a Top Producer in Texas.

Stateside can be contacted either by phone (866) 444-3332 (toll free) or by email at info@texasplans.com.  Our Telephone Appointment System can be accessed through:

By using the Telephone Appointment System, clients can take advantage of scheduling a health insurance discussion when convenient for their schedule.  During Open Enrollment phone appointment availability is expanded to include extended hours and weekends.