The History of Healthcare Reform 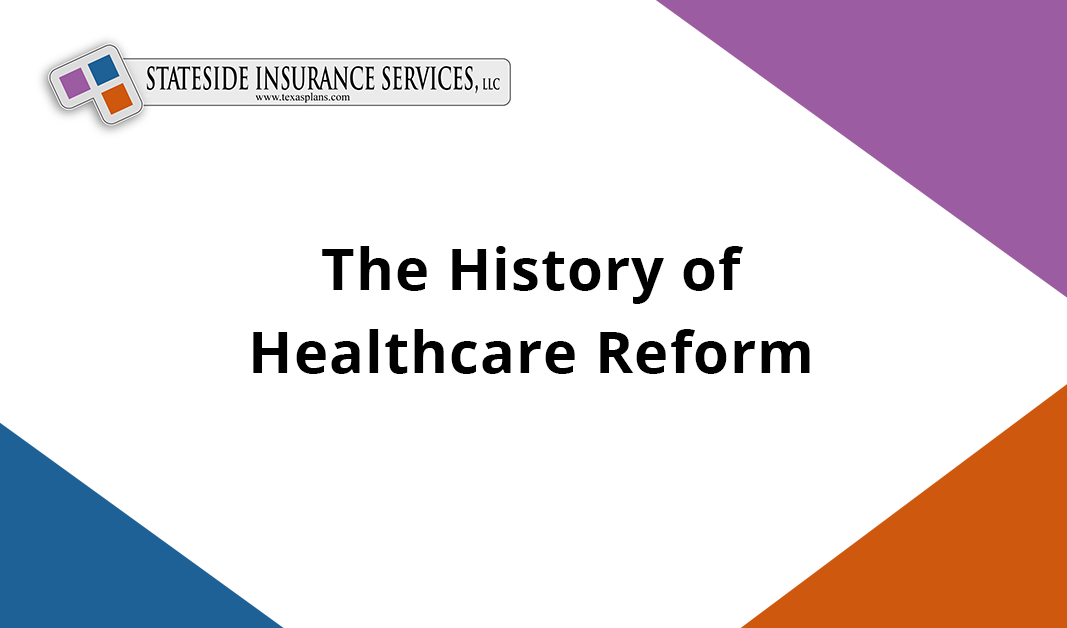 The History of Healthcare Reform

Healthcare reform was passed and signed into law by President Obama on March 23, 2010. Promulgation of rules and regulations began immediately with the first wave of rules taking effect October 1, 2010.

September 2010: Additional elements of the ACA began to go into effect, such as: no lifetime dollar limits on health care coverage, dependent children allowed to stay on parent’ insurance until age 26, no pre-existing exclusions for those under age 19, insurers barred from requiring co-payments for preventive care and vaccinations.

September 2011: Health insurers are required to go public with rates increases of 10 percent or more.

November 14, 2011: The United States Supreme Court agrees to hear arguments in the Obamacare case brought by 26 states and the National Federation of Independent Business. It argues that elements of the ACA are unconstitutional,

July 9, 2012: Governor Perry announces that Texas will not establish a state sponsored health insurance exchange. Texas will rely on the federal government to implement the exchange in Texas.

October 1, 2012: Carriers are required to adopt standardized summary of benefit documents for communications to policyholders.

January 1, 2013: ACA provides additional funding to state Medicaid programs that provide coverage for preventative care.  Primary care physicians are required to receive 100% of Medicare reimbursement rates in 2013 and 2014, which is fully paid by the federal government.

January 1, 2014: Texas consumers will have four plan options in the individual and family markets, whether the coverage is purchased within the exchange or outside the exchange. The four plans will be designated platinum, gold, silver and bronze.  There will be a lower priced plan targeting young adults.

Individuals who can afford health insurance will be required to obtain basic coverage or pay a tax. Exemptions will be available if affordable coverage is not available.

Individuals with incomes between 100% and 400% of the federal poverty line will be eligible for tax credits. Financial assistance will be available for individuals who are not eligible for other coverage. The tax credit can be paid in advance to lower premium payments each month. Individuals may also be eligible a reduction in co-pays, co-insurance and policy deductibles.

Pre-existing conditions will no longer affect an individual’s ability to secure coverage. Health insurance policies will be classified as guaranteed issue – an applicant cannot be declined based on health history or condition.

Health insurance policies will not be subject to increased premiums based on health history or gender. Policyholders can only be rated-up for tobacco use and age, which is limited to be no more than three times the lowest premium available for young adults. Important aspects of guaranteed issue that have not been finalized involve the establishment of an enrollment period to minimize adverse selection and the actual premiums for policies that must accept all levels of risk.

Waiting period for enrollment in employer sponsored plans limited to no more than 90 days.

Tax levied on health insurance companies based on the amount of premium volume.

March 4, 2015 – King v. Burwell: The U.S. Supreme Court hears oral arguments for King v. Burwell, a lawsuit challenging U.S. Treasury regulation, 26 C.F.R. § 1.36B-2(a)(1), issued under the Patient Protection and Affordable Care Act (ACA). King argues that the ACA only allows subsidies to be distributed through state-run exchanges, and that regulations implemented by the IRS exceed the authority granted to it by Congress.

June 25, 2015 – King v. Burwell: The Supreme Court ruled 6-3 that subsidies could be distributed through Healthcare.gov, the Federal Exchange, if a state did not set up its own exchange.

January 2016: Threshold for itemizing medical expenses on taxes increases from 7.5 percent to 10 percent for seniors.

January 2018: Under the Affordable Care Act, all existing health insurance plans must cover preventative care and checkups without co-pays.

Non-grandfathered plans (those plans with effective dates prior to March 2010) subject to additional standards, including limits on out-of-pocket maximums, provider nondiscrimination, and coverage of routine medical costs of clinical trial participants.

Stateside monitors the constant changes in health insurance and will continue to update Texas consumers on how these changes will affect their insurance buying decision.

Stateside can be contacted either by phone (866) 444-3332 (toll free) or by email at info@texasplans.com. Our Telephone Appointment System can be accessed through:

Phone Appointment Reservation.
By using the Telephone Appointment System, clients can take advantage of scheduling a health insurance discussion when convenient for their schedule.  During Open Enrollment phone appointment availability is expanded to include extended hours and weekends.